Post by Sarah Allen
The scariest part of creating the nonprofit for me has been the conversation with volunteer leaders to talk about our mission. I was afraid that everyone was focused purely on teaching coding. I felt that there was something bigger happening. Software developers would come up to me in unexpected places and say, “RailsBridge changed my life,” or “I started coding at a MobileBridge workshop.” We were creating this global technology culture where diversity is the norm.

I was afraid that my grandiose vision would come across as impossibly naive. Diversity issues are currently framed as a supply issue, a pipeline problem, and we need to start in kindergarten to change things. Of course we do need to fix things for the kids, yet the stories of the women who reached out showed me that we can change things now, in fact we must. We need to make it so the industry is a place where everyone is treated with respect and where everyone has the opportunity to learn.

In the past eight years, I’ve learned that diversity is like coding or design. The solution is deceptively simple, but getting there can be very challenging, requiring empathy, inspiration and hard work. The organizers of these workshops know that by building inclusive communities that make an effort to outreach to traditionally underrepresented individuals, they’re working to build a technology environment and industry where diversity is the norm.

How it all started

In 2009, Sarah Mei and I ran the first RailsBridge event, a Ruby on Rails workshop for women and their friends. Eight years ago, I had no idea anyone else would ever run a workshop like ours. Sarah and I were committed to doing this for just one year, and after that other volunteers took on the work of organizing workshops. Today, I’m humbled by an outpouring of volunteer enthusiasm and accomplishment.

Workshops went viral. Not only were strangers creating RailsBridge workshops, but people took our open source materials, or simply the idea, and adapted to other languages and communities. I’ve annotated the graph below with a listing of the organizations that have told me they were directly inspired by RailsBridge. 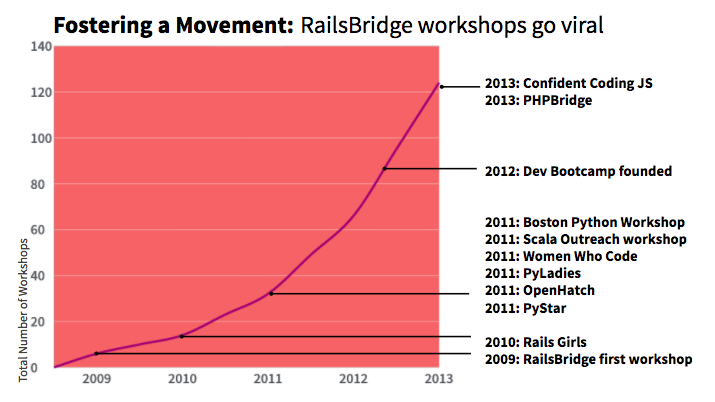 We had always envisioned that RailsBridge would offer workshops in different technologies, and in 2012 we stated JavaScript and CSS workshops. We wondered if others would want to join together and work more closely if we had a technology neutral name. So, in 2013 we renamed the organization to Bridge Foundry to spread the RailsBridge mission to other other technology communities.

After I saw more than a hundred workshops happen, I was energized to figure out how to keep scaling. In between the success stories, I had seen organizers burn out without successors and frustration from people who felt they could never do enough.

The sense of independence that enabled people to start workshops meant that many of them never asked for help. We wanted to provide that help so that when an organizer needed to step down, the community could support that transition and perhaps find a new leader.

To create a more sustainable organization, we decided to create new volunteer leadership groups who could focus on providing support to workshop organizers. Sarah Mei created a RailsBridge board and I created a representative Bridge Foundry program board. We developed a new viral model of leadership, with knowledge sharing across the Bridges. 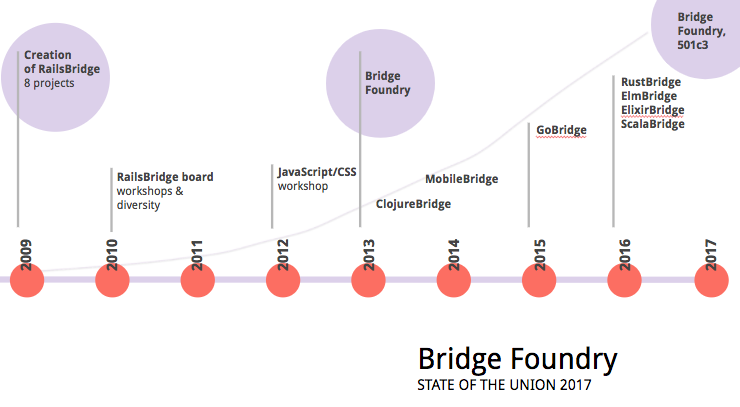 These groups work within their own technology communities, using their own preferred tools, to run free workshops to teach technology skills and improve the diversity of their communities. And every year since we started in 2009, volunteers have organized more workshops than we did the previous year.

The success of the workshop model was unexpected. I believe it’s the result of two big things: a mission that’s optimistic and heartfelt, and a strategy of workshops that allow volunteers to do a small thing that makes a difference and connects them with other humans with whom they share their joy of coding.

There’s always work to do behind the scenes. We now have a non-profit of our own to support. The non-profit can take care of administrative tasks, but I’m most excited about the unity that it represents.

By the way, I wrote this post just in time for #givingtuesday,
if you have read this far, please consider donating on facebook or paypal