At RubyConf 2010, a group of RailsBridge volunteers created an innovative kids program with the goal of sharing with the kids a fun experience of programming. Many thanks to RubyCentral, the organizers of the conference who provided the room, and our sponsors, Wealthfront, JumpstartLab and Blazing Cloud who helped us purchase supplies.

We focused on three activities over two days with time each afternoon for unstructured game play. We had a very small group of kids, which was great for a first event. The volunteers who organized and led the activities were Liah Hansen, Sarah Mei, Maxwell Salzberg and Sarah Allen. Jim Meyer also helped with logistics.

We first set up the kids with Interactive Ruby (IRB), which is a command line interpreter and used distributed Ruby to connect to a server. This deserves a longer writeup, but we did this using code from here. More recent code using rinda to avoid specifying an ip address looks promising.

The kids then typed in commands to draw lines, shapes and text which appeared on a single screen. This was effective in their learning from each other and sparking creativity.

After that fun introduction, we copied a set of examples (via USB drive) to each computer and the kids modified the code to change its behavior. This worked well, since typing is boring and the kids could see big effects with small code changes.

Next we had the kids use a scripting language, called Pie, where you can use a hosted development environment, the bakery, to develop scripts and published web-based adventure games. We had two groups of two kids. They pulled creative commons images from Flickr and wrote scripts based on simple examples. Each group created a game: The Path of the Pointy, Sharp Teeth and Labrynth.

Lessons learned: browser-based development is awesome for the quick start. The Pie Bakery needs better error reporting and Flicker integration, since it is a drag to get URLs out of Flickr.

On Saturday, we had just two kids and Max led some soldering, kicking off the activities with a series of videos for inspiration. 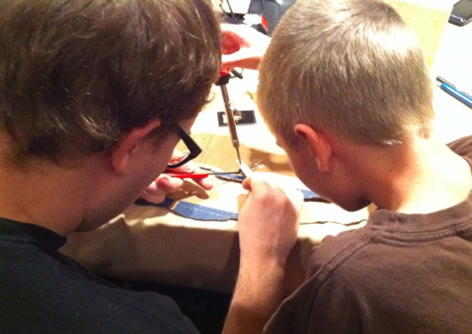